Stefan Dumbleton is Delta Energy Services’ Quality Services Manager, responsible for the Business Management System across Delta’s Western offices.  Stefan has been with the company for more than ten years, initially as an inspection coordinator and moving up to his current position, where he heads the Quality Services Department.

This year will see Stefan achieve one of his lifelong ambitions.  On the 23rd of April 2017, he will be joining 40,000 participants in running the Virgin London Marathon.  Stefan will be running on behalf of Asthma UK and Delta is proud to support him and the charity he is representing.  Stefan is a life long asthmatic himself and has chosen this charity after finding out how life threatening this disease can be for some people.

His passion for running began only four years ago, when he decided he needed to lose a few office based pounds, and since then he has run nearly 3,000 kilometres.

While visiting Delta’s US office in 2016, Stefan was lucky enough to participate in the Sugarland Half Marathon, Houston, TX, thanks to a client contact. He thoroughly enjoyed the experience, and found that everything is bigger in America – including the medals! 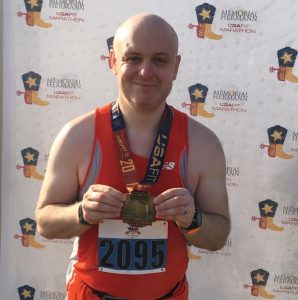 Stefan is married with two children, and his whole family thinks his hobby is crazy. In fact his 6-year-old son recently asked him whether he will be beating Mo Farah in the London Marathon!

Stefan has many more miles of training to do before he gets to the start line, but we’ve asked him to keep us updated on his training progress and how he gets on in the marathon, (a total distance of 42.195 kilometres, or 26 miles 385 yards), through our website.  Keep a look out for regular updates.

Those interested in supporting Stefan can make a donation through his JustGiving page, http://justgiving.com/stefan-dumbleton2017

The increasing global demand for fossil fuels has meant that oil companies have had to search for new and innovative means of extracting this increasingly vital commodity.

Due to the finite nature of traditional fossil fuels, as a society we are under increasing pressure to generate our energy in a different way.

To ensure we are able to power the world in the years to come, it is essential that we bring an increasing amount of renewables into our energy mix.

Despite being a relatively young industry, having only started to grow in the 1940s, petrochemicals have become an essential element of the chemical industry.